It was quite a day for Patrick Curry… he took home three awards (Iron Terrier, McInnis Award for Spirit, Most Improved Player) and was named team captain for 2019-20! pic.twitter.com/i8xvKv2EDp

Mid Fairfield right-shot forward Ryan Fine becomes the first ‘05 to commit to a NCAA program, choosing Boston University after visiting the campus recently. Highly skilled, will likely be at NTDP down the road. 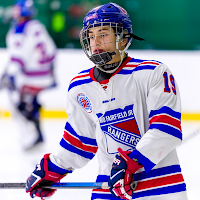 Just days before new NCAA restrictions on recruiting go into effect, high-end forward Ryan Fine becomes BU’s first 2023 recruit –and college hockey’s first 2005 to give his verbal. He starred for the Mid-Fairfield Rangers ‘05s, who won the Eastern Hockey Federation Bantam Elite championship last month in Boston.
Cox reported in NEHJ that, from Center Moriches, N.Y., was coached last season by former NHL and Vermont star Marty St. Louis, noting that Fine visited the Boston University campus Friday morning prior to taking part in the Eastern Exposure Hockey All-Star Weekend in Worcester. Cox added that the 5’6” forward “is certainly one of the top ‘05s in the United States and will be a candidate for the 2021-22 USA Hockey NTDP U-17 team.”
●NEHJ report

2005 Ryan Fine to BU. Dangerous every time he touches the puck. Great in transition with a sneaky shot. Lots of speed and skill in space Three reports in his profile; all with positive reviews. Star rating TBD.
👤https://t.co/d8RHkUyyDXhttps://t.co/xu1iVfO78Q

After last summer’s Crimson Combine where Fine was selected for the all-star team and named MVP, USHR wrote: Ryan Fine (Mid-Fairfield) — “A skilled, smart, natural goal scorer who is unselfish and makes plays. Clever and a pure skater — he just glides.”
►2022 recruit Ryan Greene, a Newfoundland native playing for Selects Academy in Connecticut, spoke with The Telegram (St. John, N.S.) about his decision to commit to BU. A standout playmaker who plans to play with the Selects 16U next season, Greene also visited Providence, BC, UMass, Quinnipiac and Michigan before committing to BU.
2019 recruit Robert Mastrosimone assisted on a pair of goals, including the overtime game-winner as Chicago defeated Muskegon, 5-4, to open its conference finals series.
● Chicago Steel recap
2019 recruits Trevor Zegras and Case McCarthy assisted on a third period goal giving Team USA a 2-1 lead over Russia in the IIHF World U18s semifinal, but Russia rallied late to tie and eventually scored the only shootout goal for a 3-2 win. Team USA will play Canada this morning in the Bronze medal game, seeking to earn a medal for the 16th consecutive year.
● IIHF box score
In Thursday’s quarterfinal 6-0 win against Finland, Zegras assisted on four goals while Alex Vlasic’s perfect stretch pass set up Team USA’s first goal.
►2019 recruit Domenick Fensore’s draft stock continues to rise. NHL Central Scouting’s final rankings has him at #68 among North Americans. And his ranking from TheHockeyWriters.com soared from #133 in March to #55 in April. Dominick Fensore (LD, USA, NTDP U18)

ANALYSIS: Fensore is my biggest riser for April, rocketing up my rankings by continuing to shine and grow his role with the NTDP. That entire defence corps for the NTDP is impressive — the entire roster is draft worthy, top to bottom at every position — and Fensore is becoming a big part of their continued success. He’s a modern-day defenceman, undersized but a strong skater, terrific puck-mover and very capable power-play quarterback. In Fensore, I’m seeing shades of Shayne Gostisbehere. Back when Gostisbehere was drafted, in the third round in 2012, the NHL was still fixated on size after watching Los Angeles and Boston win Stanley Cups with bigger teams playing a power game. As mentioned with Mastrosimone, that heavy hockey era has been overtaken by skill and finesse, so that should also bode well for Fensore’s draft stock. Fensore is even younger than Harley, just over a week away from being 2020 eligible, so he’s got tons of development time ahead of him. Fensore is small and will require a patient approach, but the payoff could be huge for the team that takes a chance on his potential.

ANALYSIS: Mastrosimone has become a consistent force in the USHL and he’s been a standout when representing Team USA at the Hlinka Gretzky Cup and World Junior A Challenge. He’s got high-end skill, perhaps more so than Poulin in terms of that flash factor. Mastrosimone strikes me as the kind of player who will put up points at every level. He may not be a star or even a front-liner, but he’ll be productive and do his part offensively. With the NHL trending towards speed and skill, Mastrosimone should get snatched up somewhere in the second round.