Five for the Cup; high-scoring forward commits for 2021

Terrier Fan Blog May 24, 2019 Comments Off on Five for the Cup; high-scoring forward commits for 2021

Five Terriers—Charlie Coyle, Matt Grzelcyk, Charlie McAvoy and assistant coaches Jay Pandolfo and Joe Sacco—will look to put their names on the Stanley Cup as the Bruins and the Blues begin the Cup finals on Monday, reprising the 1970 final. Pandolfo already is on the Cup twice, having won with New Jersey in 2000 and 2003.
● BostonSportsJournal.com Chara-McAvoy Mutual Respect
Looking ahead

BU gained its fifth recruit for 2021 with a verbal commitment from standout Shattuck St. Mary’s Midget Prep forward Artem Shlaine. A native of Moscow transplanted to Florida, the 6’1” left-shot center produced 90 points (34G, 56A) for the Sabres, the top U.S. midget team throughout most of the season. Shlaine added a dozen more, including three power play goals, in the Tier 1 18U nationals, just a point behind the tournament leaders.  A 2018 draft pick of USHL Sioux Falls, he suited up for the Stampede in two playoff games this season (more below). 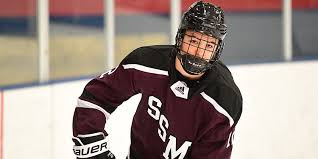 New England Hockey Journal’s Jeff Cox says Shlaine is “a power forward with skill. Plays a heavy game. He was so good for Shattuck this year. Best forward in 18U hockey this year.”

Last month, Shlaine was drafted 56th overall in the OHL Priority Draft by the Owen Sound Attack, whose general manager said, “If he comes, he’s going to be a phenomenal player.”

In 2017-18 Shlaine scored 88 points (51G, 38A) for South Florida Hockey Academy U16 and earned a spot in the USA Hockey Select 16 Development Camp all-star game.
In 2017, he played in the World Selects Invitational 15U, scoring six points, and skated for the Cape Cod Whalers 16U in the Boston Junior Bruins’ shootout, earning a strong review from NeutralZone:

Artem Shlaine # 13 (F, L, South Florida Hockey Academy, 2002)- Lengthy left shot forward at 6’0, 155. As he continues to develop physically, he will be even more dangerous. He is really creative and poised with the puck, anything can happen when the puck is on his stick. He slows the game down and sees the ice so well. He is not the faster player on the ice, but he has the ability to do everything else. High IQ and makes great hockey plays.