A BU flavor at the combine; McAvoy scores in Bruins’ win

Terrier Fan Blog May 28, 2019 Comments Off on A BU flavor at the combine; McAvoy scores in Bruins’ win 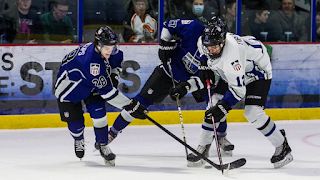 The 2019 NHL Draft Combine began Monday in Buffalo with seven Terrier commits among the 104 invitees. The group includes four from the NTDP U18s— defensemen Domenick Fensore, Case McCarthy and Alex Vlasic and forward Trevor Zegras—along with forwards Robert Mastrosimone (Chicago Steel) and Ethan Phillips (Sioux Falls Stampede, photo) and blueliner Cade Webber (The Rivers School). All are 2019 Terrier recruits, except for Webber who will play for BCHL Penticton next season.

NHL.com’s Day 1 report on the Combine identified Phillips as a “top underated prospect.” 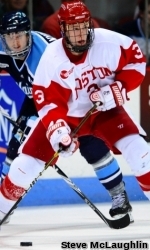 Charlie Coyle, one of the three Terriers skating for the Bruins, has penned an article for The Players’ Tribune, “Let’s Bring It Home,” tracing his hockey roots from his early days in a Weymouth, Mass., hockey family.
● ThePlayersTribune.com introduction
BUToday.com Five Ex-Terriers (Players and Coaches) Have Huge Role in Bruins Stanley Cup Run

A New York Times profile of Zdeno Chara points out that his blueline partner, Charlie McAvoy, was born 32 days after Chara’s NHL debut with the Islanders and that as a 20-year-old rookie, Chara was mentored by another Terrier, Scott Lachance.