Power forward added for 2019-20; more from the NHL Combine 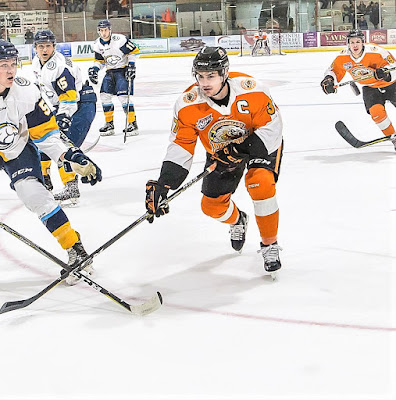 Terriers have received a commitment next season from AJHL Drumheller right-shot power forward Markus Boguslavsky. The 6’1” 190 lb. Calgary native captained the Dragons last season and scored 32 points (16G,16A), while leading the team in penalty minutes with 117. A ’98 birthdate, he added four points in five playoff games. Boguslavsky, whose father is from Ukraine and whose mother is Australian, was named to the AJHL 2018-19 All-Academic Team.
Following the 2017-18 season when he scored 33 points for the Dragons, Boguslavsky was drafted by USHL Dubuque and attended the Fighting Saints’ camp last summer. Previously, he played Bantam and Midget Hockey with the Calgary Flames organization and was selected in the 2014 WHL Draft by the Calgary Hitmen.
● Elite Prospects Page
● Dragons bio
● Dubuque camp profile video
From the NHL Scouting Combine
● NHL.com Day Five report

Top underrated prospect
Robert Mastrosimone, No. 53 in NHL Central Scouting’s final ranking of North American skaters, focused on minor details to become a major threat for Chicago of the United States Hockey League this season.
The 5-foot-10, 158-pound left wing, who had 16 goals in 60 games as a USHL rookie in 2017-18, had 60 points (31 goals, 29 assists), 20 power-play points (seven goals, 13 assists) and two shorthanded goals in 54 regular-season games this season. He led Chicago with 15 points (seven goals, eight assists) in 11 USHL playoff games.
“I think this year I became more of a shooter,” said Mastrosimone, who will play at Boston University in the fall. “I worked on my release in the summer, getting it off in tight areas. I also had guys I could play with who knew how to dish the puck. Nicholas Abruzzese (51 assists, No. 122 in Central Scouting’s final ranking of North American skaters) made my game easy; he gave me tap-ins on some of my goals.”

Trevor Zegras, one of the real personalities in this class, holding court. Says he’s tried to model his game after Patrick Kane, thinks he plays the way the NHL is going with speed and skill. Fielding a lot of questions about teammate Jack Hughes, too. pic.twitter.com/onQmOR5Vv7

Seems like Zegras made a highlight reel play or two every game I watched. There were so many clips that I couldn’t squeeze into the article. Here are three that I liked for various reasons. The first clip is particularly awesome. pic.twitter.com/NKNoekBJ08

Sydney Healey to BU. The ’22 forward has a good hockey sense and high compete level. Healey handles the puck well while maintaining control, allowing her carry the puck deep. She uses her body against the boards & is willing to block shots in her end.
👤 https://t.co/3wggbAazwRpic.twitter.com/EddHYRMGLl