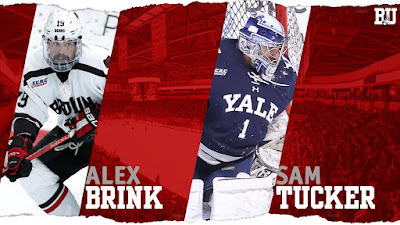 A pair of graduate transfers from ECAC schools will join the Terriers for the 2019-2020 season: goalie Sam Tucker (Yale) and right wing Alex Brink (Brown).
Tucker, a 6’3” native of Wilton, Connecticut, didn’t play during his freshman year and has a year of eligibility left; however, the Ivy League doesn’t allow athletes to remain in graduate school and continue to play.
This past season, Tucker had a 2.53 GAA and a .917 save percentage in 19 games for the Elis, yielding two goals or less in 10 of those games and authoring two shutouts. He was named Second Team All-Ivy and was the recipient of Yale’s Edward M. Wright, M.D. Award for athletic and academic accomplishments, leadership and dedication to the higher purposes of intercollegiate athletics. This award is based equally on two factors: success on the ice and success in the classroom. His career stats at Yale: 2.88 GAA, .903 save percenterage.
Prior to Yale, Tucker played prep hockey at Choate Rosemary Hall, where he led all prep goalies with a .952 saves percentage in 2014-15 and had a 1.50 GAA that season, earning New England Prep All-Star West honors and first team All-Founders League. He also played fall major midget hockey for Mid-Fairfield, winning a championship at the 2015 USA Hockey U18 Nationals.
● Elite Prospects page
● YaleBulldogs.com Tucker bio
● CHN Game-by-Game stats (2018-19)
Brink, a 6’0” 201 pound right-shot forward from Hamilton, NY, red-shirted his sophomore season and had a career-high 14 points (6G, 8A) last season along with 63 penalty minutes. He was named ECAC Player of the Week this past January 7 after leading the Bears to the Three Rivers Classic championship. He scored twice and added an assist in the title game win against then #14 Union.
In the deciding game of Brown’s ECAC quarterfinal series with Princeton, Brink scored the triple-overtime winner and assisted on a pair of tallies.

Bears win it with 16:30 left in TRIPLE overtime to advance to the quarterfinals! pic.twitter.com/thV60zS7L6 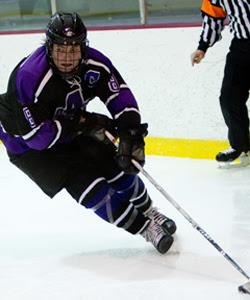 ►Head Coach Albie O’Connell has announced Amherst College assistant Eddie Effinger as the Terrier Hockey program’s new Director of Hockey Operations. A 2012 graduate of Amherst, he has been an assistant on the Mammoths’ staff for the past six seasons. Effinger captained Amherst during his junior and senior seasons, leading the team to the NESCAC championship in 2012. Following graduation, he played one season of pro hockey with Quad City in the CHL.

What a great pick up for BU. One of the first coaches I met when I got started scouting and he gave me a firsthand look into the D3 scouting process which guided me in what to include in player writeups. Congrats Eddie! https://t.co/JC8e5ojTJE