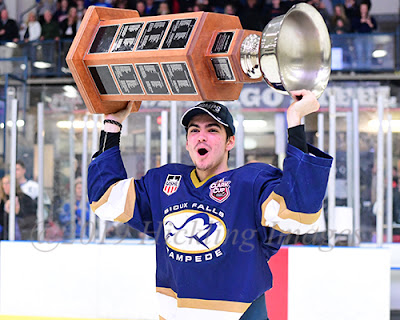 Photo by Dan Hickling
Head coach Albie O’Connell’s 10-man freshman class, announced last week, grew to 11 with a commitment from left-shot center Sam Stevens, a former Wisconsin recruit.
A 2000 birthdate, born in Montreal and now residing in Boston, the 6’1”, 184 lb. Stevens is a dual citizen who has represented both the U.S. and Canada in tournaments, including the Quebec International PeeWee and the WSI-U15.

Former Wisconsin ‘mit Sam Stevens to BU for 2019. Rare combo of size & skill & can make an impact on the game lots of ways. Tough to contain in open ice with his feet moving because of his sheer size and stickhandling ability. Gets pucks to the net.
👤https://t.co/5OwMHrUO2k… https://t.co/VbdTybw280

Last he played for USHL Sioux Falls, along with fellow freshman Ethan Phillips and produced 25 points with eight goals in the final month-and-a-half of the season. Stevens added four points in the Stampede’s three-game sweep of Chicago in the Clark Cup finals, including a shot off a faceoff in game two and a breakaway short-hander in game three.

At the 2017 Select 16s, Jeff Cox wrote that Stevens, who scored nine points in five games, “has good size and can really fire the puck. He’s good below the dots and has hands that allow him to maneuver and find corners even in traffic.”
● Elite Prospects page
● USHL stats page

Looking back
New England Hockey Journal reports that a pair of Terrier standouts, Mike Grier and Scott Lachance, teamed up to coached Total Pro Evaluations to the ’03 Division in the Battle of Boston tournament this past weekend. Grier, an assistant coach with the NJ Devils, and Lachance, an amateur scout for New Jersey, each had a son on the team: St. Sebastian’s forward Jayden Grier and Tabor Academy forward Shane Lachance, who also is the grandson of Terrier legend Jack Parker.
Women’s Team
Coach Brian Durocher has announced a five-member freshman class for the 2019-20 squad. It features three forwards, Haylee Blinkhorn, Brooke Ersoy and Julia Nearis, and two blueliners, Nadia Mattivi, Grace Parker.
● GoTerriers.com report and player thumbnails
The IceGarden.com listed Terrier forwards Sammy Davis and Jesse Compher among the players with the best breakout performances of 2018-19 in women’s NCAA hockey.
Compher led BU in points with 61, while Davis had a team-high 25 goals.