Terriers hit the ice on Thursday in their first practice for the 2019-20 season, which opens on October 5 at Union College. 15 holdovers join 13 newcomers (11 freshmen and two graduate transfers) on the BU roster.

Day 1 of practice in the books for the Terriers.  Lots of energy and pace.  Good start! #itsgreattobu 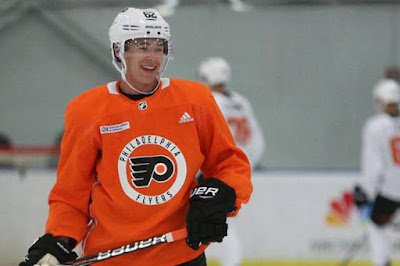 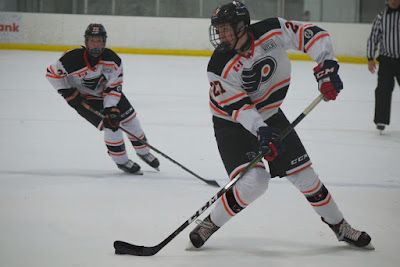 ►2021 recruits Tyler Boucher, Jeremy Wilmer and Roman Schmidt (photo) begin their NTDP careers on Saturday and Sunday as the U17s take on the NAHL Johnstown Tomahawks.
►Several Terriers prospects made strong impressions at the recent River Rats Jamboree in Canton, Mass. New England Hockey Journal offered assessments:
U-18 Division:
Quinn Hutson   (#2 among forwards)
No. 27 North Jersey Avalanche, 1/1/02, RW/LW, right shot, 5-10/180
NCAA commit: Boston University
Hutson scored and made plays for his linemates here. He has a good stick and hunts pucks. He also showed the ability to play his off wing at times. No one in the entire jamboree outside of Jefferies made more plays, despite his team losing all three games.
U-16 Division
Devin Kaplan
No. 21 North Jersey Avalanche, 1/10/04, C/RW, right shot, 6-2/189
NCAA commit: Boston University
Kaplan, who played up with this team last year, is physically mature and able to use his size and brute strength to his advantage. He has a hard shot and is heavy on pucks. He’s a NTDP 40-man camp invite for sure, but if his skating and hockey sense can improve a little, he’ll be even more highly regarded.
Lane Hutson
No. 23 North Jersey Avalanche, 2/14/04, D, left shot, 5-7/120
Hutson is on the smaller side, but his ability to retrieve pucks and transition from defense to offense are elite skills. He’s smooth and can escape trouble. He has offensive instincts and should make the NTDP Evaluation Camp.
►Last season, Quinn Hutson (2021), Kaplan (2022) and Wilmer formed the top-scoring line for the nationally-ranked North Jersey Avalanche 16Us . Lane Hutson, Quinn’s younger brother, is a 2022 recruit who played for HoneyBaked Bantams last year, who will join Kaplan on this season’s 16U Avs’ squad.
►TPE Hockey has ranked Kaplan #10 on its Top 20 under 17 ranking (Instagram video, #21). 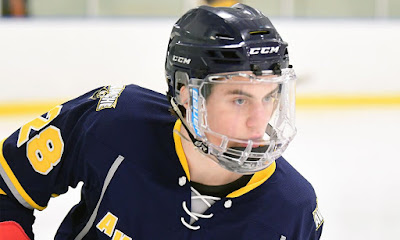 ►At the ECC Labor Day Cup, Quinn Hutson’s strong performance led the Avs’ U18s to a 4-1 win in the final, with Hutson scoring a goal. NEHJ:

Hutson is the offensive catalyst for North Jersey. He has good speed which he uses to recover pucks, drive the net, and draw penalties. He’s able to find seams in opposing defenses and exploit them. He scores and he also makes really good passes from down low after hunting pucks.

►NEHJ also interviewed2020 recruit Braden Doyle who will play at USHL Dubuque this season following three seasons at Lawrence Academy. The left-shot defenseman, selected by Los Angeles in the sixth round of the 2019 NHL entry draft, pointed out that “BU was always my dream school growing up. Growing up in Lynnfield, 15 miles north of Boston, I went to games and watched players like Jack Eichel (North Chelmsford, Mass.). Scott Young (Clinton, Mass.), one of the coaches on my Minuteman Flames team and the father of Tyler Young, whom I played with at Lawrence and on the Flames, brought us to some BU games. It was an unreal experience to go there and see the campus. Plus, I like the city. And BU – you couldn’t ask for a better hockey school. I know the coaches pretty well, and I know it will be a good spot for me.”
Doyle was the Spartan’s top-scoring defenseman last year with 29 points (5G, 24A) in 28 games. He is joined on the Fighting Saints roster by Mark Cheremeta, who skated for BU last season, and has expressed interest in returning to Comm. Ave in 2020.
The blueliner was named recipient of the John Carlton Memorial Trophy in 2018-19, given annually by the Boston Bruins to outstanding student athletes in Eastern Massachusetts junior hockey – past winners include Bruins forward Charlie Coyle in 2010. During the 2015-16 season, Doyle was a teammate of current freshman Robert Mastrosimone on the Shattuck St. Mary’s bantams.
● LAKings.com profile
Looking back

SIGNING ALERT: The #Coyoteshave signed F Clayton Keller to an eight-year contract extension. As per @craigsmorgan, it carries a $7.15 million AAV...

Follow all the deals on our FA Tracker: https://t.co/JGzYiodt23#TSNHockeypic.twitter.com/AvIJxy2GMw

Five former Terriers are in Hockey East’s Four Seasons Club: four seasons in Hockey East AND four seasons (>60 games) in the NHL. Can you name them? All 35 in conference history are here.
Max Willman, a grad transfer on last season’s Terriers has signed on with ECHL Reading, joining the previous season’s grad transfer, Drew Melanson, on the Royals’ training camp roster.
● Royalshockey.com report