Terrier offense erupts for 7-4 win at BC

Terrier Fan Blog December 2, 2017 Comments Off on Terrier offense erupts for 7-4 win at BC 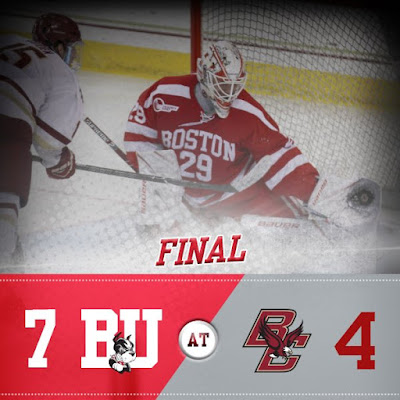 Terriers rallied from an early 2-0 deficit to defeat #15 BC, 7-4, at Conte Forum in the 275thmeeting in a rivalry that began a century ago in the 1917-18 season. BU’s offense was led by a pair of goals from captain Brandon Hickey, four assists by Patrick Harper and a career best three-point night (1G,2A) from Shane Bowers.
With the victory, BU has now won four consecutive regular-season meetings with its arch-rivals for the first time since winning 11 straight from Dec. 9, 1992, to March 4, 1995.
The Eagles came out fast and grabbed the lead when Aapeli Rasanen beat Jake Oettinger to the glove side from just outside the blue paint. They doubled the lead 44 seconds later when Ron Greco drove the net unmarked to bang home a rebound. Hickey tried to settle down his teammates, noting:

“We just had to relax. They were feeding off the crowd. I was just telling the guys to bounce back, play the right way. Get pucks in and get pucks out.”

After BC goalie Joe Woll stopped a 3-on-1 rush and a Brady Tkachuk breakaway, BU halved BC’s lead midway through the period on Hickey’s slapshot from the right point, assisted by freshmen Logan Cockerill and Bowers.
Three minutes later Cockerill pulled BU even, deflecting home a Bowers centering pass with an assist also going to Harper. Late in the period with BC on a power play, Tkachuk collected a clearing pass by Jordan Greenwaybehind the Eagle defense and broke in on Woll, beating him high to the glove side for a 3-2 Terrier lead. Brien Diffley picked up the second assist. In the final seconds of the first, Bobo Carpenter broke in and nearly added a fourth goal. 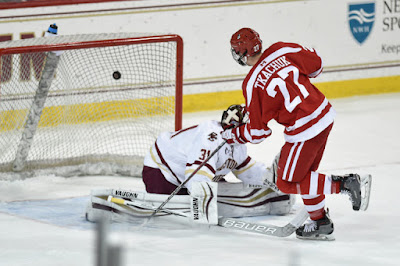 BC evened the score early in the middle period on Greco’s second goal, but the tie didn’t last long. On a power play, Harper corralled the rebound of Chad Krys’ shot and snaked a pass back through traffic to the sophomore defenseman who one-timed a shot from the left circle past Woll for a lead BU would not relinquish. Just two minutes later, Hickey connected for his second of the game, picking up a loose puck in the slot and whipping a shot past Woll on a delayed penalty. Tkachuk and Drew Melanson earned assists.

On the ensuing power play, the Terriers needed just 47 seconds to find the net again. From behind the goal line, Harper set up Carpenter for a wrister from just outside the crease for a commanding 6-3 lead. The Eagles got one back on a power play in the final minute of the period when Julius Mattila ripped a one-timer past Oettinger from the right circle.
BU killed a BC power play to open the third period. After the teams had combined for ten goals in the first 40 minutes, the only score in the third period was Bowers empty-netter off Harper’s fourth assist of the night. 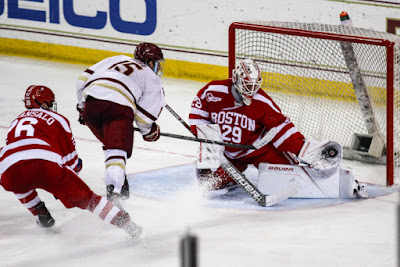 Photo by Matt Dressens
Oettinger turned aside 29 BC shots, making a number of tough saves in the third, including an impressive split save on JD Dudek, as BC tried to mount a comeback. He improved his career mark against the Eagles to 4-1-0
Commenting on his team’s offensive outburst—it’s second seven-goal game in its last three starts—Coach David Quinn explained:

“I knew we were going to score, we’re not a team that’s not going to score goals. Our power play is getting better. Our young kids are getting more acclimated. We’ve had chances. There are plenty of games that we don’t score and it’s not from a lack of chances. We’re getting a little bit of puck luck and we’re getting rewarded for our chances.” 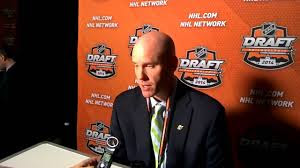 ● Boston Herald: Rookie McAvoy getting his minutes in

Evan Rodrigues scored his third goal for Rochester, which dropped a 5-4 decisionto Hartford. He has seven points in seven games since returning from an injury.
Women’s Team Terriers battled #2 Boston College to a 2-2 tie Friday afternoon at Conte Forum. BU captain Rebecca Leslie gave the Terriers a 1-0 lead in the final minute of the first period, with assists to Deziray DeSousaand Victoria Bach. The Eagles countered with a power play goal in the opening minute of the second period.
Thirty seconds into the third period, Nina Rodgersconverted the rebound of an Abby Cook shot for a power-play goal. Leslie also had an assist. BC knotted the score on an equal-strength score midway through the period to close out the scoring. Goalie Erin O’Neil stopped 36 Eagle shots.
The teams meet again Saturday at Walter Brown Arena with puck drop at 3 p.m.
● GoTerriers.com recapand comprehensive box score
● Full-game replay